In this article, I am going to be discussing all about the wonderful and beautiful lantern festival of Taiwan. On the night of the first full moon of the lunar year is when the individual is in Taiwan venture outside to celebrate the world-renowned and world-famous Lantern Festival. It includes people of all ages. It features almost everything from handheld lanterns to huge floats which have been decked up with paper lights. This festival is one of the most loved events in the entire year for Taiwanese people.

This lantern festival in Taiwan is actually a major tourist attraction, and because of the Taiwanese tourism bureau, a lot of people go there every single year. Every year, they organise a huge variety of events where a lot of local companies end up sponsoring some very high tech lanterns, and tourists get to be a part of this amazing event.


Here is how all of it began.

In the year 1990, the tourism bureau of Taiwan actually devised a plan to hold an event that would end up helping people celebrate the local folklore. Finally, they decided to hold a huge lantern festival so that it can coincide with some very old customs like the Pingxi Sky Lantern Festival and the Yanshui Fireworks Festival, both of which are some magnificent festivals of light.

For the Taiwanese people, the lunar calendar is very important, and it obviously comes as no surprise, that the very first full moon of the year has been considered as an auspicious time of the year for these people. There are so many traditions across the world that are around this very special night, but this one is the most famous one.

The small town of Pingxi is also a hillside town, and it has been home to this breathtaking tradition that has been a very popular tourist destination for a very long time. Around the time of the first full moon, the sky is adorned with millions of sky lanterns. These were once used as signals for villagers so that they can let their families to know that they were safe and sound, but now, these lanterns actually carry people’s wishes and hopes for the New Year, into the night sky. 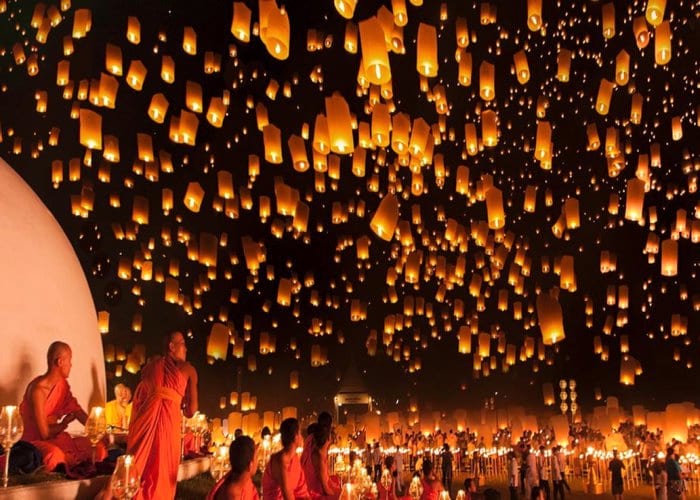 Now I will talk about the Yanshui fireworks festival. This fireworks festival is not for the faint-hearted. Every single year men and women put on some helmets and wear some thick clothing, because they actually stand between pieces of fireworks that are set off. Yes, you read that right. People actually stand close to the fireworks. The town side people believe that a God rescued the area in the 19 century from a plague and they say that this is their way of thanking him.

Want to join the discussion?
Feel free to contribute!